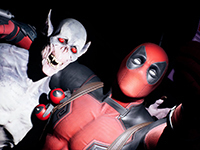 We knew it was all coming and now we finally get to see the first DLC character joining in the mix for Marvel’s Midnight Suns. This one is Deadpool that Firaxis Games let loose a long while back and shows us all what the Merc with a Mouth is going to bring into the game here on January 26th. Yes, it is a very short wait for us to see Deadpool added to Marvel’s Midnight Suns on the PS5, Xbox Series X|S, and PC. As long as you are looking to get more of the game, try to get that Spider-Man romance going on, and want to enjoy a little more to the story and see how the character is going to build into the supernatural side of things out there.

As we can see in the latest trailer here, it looks like there is a new wave of Vampires out there for the Midnight Suns team to take on. This does seem like it would be something easy for the team to handle with Blade being a huge name on the team, but it looks as if Deadpool is getting pulled in. I have a feeling it is going to be linked to the Hydra side of things since Deadpool is not the usual supernatural character out there. Unless we are finally going to see Mistress Death in the game too… Maybe he would be able to take her to the custom Food Truck at the Abbey now while offering the Midnight Suns some new cosmetics, stories, and a whole lot of new skills and abilities into the fight. It definitely does look like Deadpool will be bringing a whole lot of damage to those undead when you see it all here.

Marvel’s Midnight Suns — The Good, The Bad, And The Undead

The Merc with a Mouth is now the Merc with a Date. Join Deadpool as he teams up with the Midnight Suns to tear evil a new one on January 26th!

Expand your adventure with Deadpool in The Good, The Bad, and The Undead, the first DLC for Marvel’s Midnight Suns. Deadpool joins the team as an in-your-face damage dealer wielding 10 unique Hero abilities. Plus, enjoy new story missions, a tasty new Abbey Upgrade, and some stylish cosmetics for everyone’s favorite Merc!

Did you think that we were going to see Deadpool join the Midnight Suns so soon after launch or did you think the DLC was going to take longer to get out there? What do you think the Food Truck will actually offer to the Abbey or will it just be something we will need to navigate around while searching the grounds? Will we be able to make that Deadpool and Spider-Man romance that the comics go with or will that be too much for the target audience of the game? We want to hear from you about all of this and you can do that in the comment section below. There is still a whole lot more to come out for Marvel’s Midnight Suns, so please keep checking back for all of those updates and everything else the game will offer to us. We still have much more DLC on the way and maybe some other new modes too.