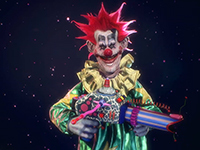 The Killer Klowns are now ready for a bit of a close-up as we gear up for the fun Killer Klowns From Outer Space: The Game will hold

The show is kicking off here for Killer Klowns From Outer Space: The Game as the titular clowns are now on display for us all here. Five of them and to show off the five different classes those on the Klowns side of things will have to play with. Not to mention a great showing that Teravision Games is taking some great care to make sure the fun from Killer Klowns From Outer Space also makes it over to the game. The Beta for it is about to kick off soon and then the launch on the PS4, PS5, Xbox One, Xbox Series X|S, and PC, so we need to make sure it is all on point. That or be epic enough to sell even those that have never seen or heard about this wonderful IP. Seriously, you should have a watch if you have not as of yet so you can get a better respect for all of the different bits of weirdness this one will offer us.

In Killer Klowns From Outer Space: The Game we will get to take out three of the five following classes/clowns on our missions. We have the Fighter, Scout, Tank, Trapster, and Tracker to choose from, and with each of their own boons and banes. Most of them look like some cannot put up a solid fight beyond the Tank or Fighter. The rest rely on helping out the rest of the team, calling in minions to do the dirty work, or finding and marking those humans running around so someone else can come and mop up. I am sure that the non-fighters of the Killer Klowns will have some form of offensive nature, but it will be more of a slowdown for the humans than anything. Especially when you see that the Scout can see through the fog of war, so it would be a little overpowered if they could also have a ranged attack. Have a look at each and the basics we have for each just below.

Killer Klowns From Outer Space: The Game — Meet The Clowns

Meet the Klowns! The scary, iconic, evil Killer Klowns From Outer Space arrive in the upcoming 3v7 asymmetrical multiplayer horror game straight from the original 1988 movie, and they will do what they did best all those years ago – hunt down humans! Say hello to Trapster, Tracker, Scout, Fighter, and Tank (known to movie fans as Rudy, Spikey, Jumbo, Shorty, and Chubby).

Killer Klowns From Outer Space: The Game will release in 2023 on Steam, PS5, Xbox Series X|S, PS4, and Xbox One.

Tracker’s specialty is, well, tracking. This class, based on Spikey from the film, is not the best at combat. He thrives when looking for tasty humans who are running around the map looting, tooting – sometimes even shooting! Within the Klown team, the Tracker provides situational insight and support to his teammates by doing several things. He can shoot humans with a Popcorn Bazooka (popcorn bits stick to the humans and reveal their position on a map to other Klowns) or summon the Balloon Dog that will point towards the nearest survivor. If the prey tries to get away, Tracker will hop into his shiny (and, of course, insured) Invisible Car or chase them on foot, being able to vault over obstacles.

Rudy will scare the living crap out of Earthlings and make sure they always feel at least a little bit nervous while scouting for valuables or trying to escape the town. He can’t fight that well, but he makes up for this weakness by actively scheming and placing traps. Trapster’s Jawbreaker Mace is bursting into a popcorn explosion on contact, allowing other Klowns to see attacked humans through nearby walls. He can sense human traps and even has an arsenal of his own. The first is the Baby Klown – an ugly, larvae-looking buddy who springs up and latches to the victim, holding them down. Come get your sweet nutritious human! The other trap is the Popcorn Mine. C4 those meat bags to your heart’s content, marking those within the blast radius with the same “wallhack vision” debuff as the Mace.

The Tank is chubby. In fact, he IS actually “Chubby” from the movie. This absolute unit of a Klown is slow, but also tough as hell. If he catches you, you’re probably mashed potatoes. His Extendable Jawbreaker is the Tank’s only ranged weapon. Whip this alien flail around or charge it up for more reach and power, causing destruction to anyone who dares to try and catch it – with their face. His signature abilities are Sticky Bash and Rage Rush. With a powerful downward strike, the Klown summons a carpet of cotton candy that traps anyone caught within it, or goes rampage mode, charging into his enemies while busting through obstacles and taking less damage from firearms. Remember his cocoon straw scene from the movie? If you know, you know. Chubby can stick a straw into any cotton cocoon, slurp some energizing human intestines, and gain a limited-time movement speed buff. Yummy!

Please say hi to Jumbo. He is the only alien invader that can use the Klown Jump to leap into unexplored territory, which for other Klowns is covered with fog on the overhead map. Pretty handy, right? Scout is the ultimate aggressive reconnaissance maestro, specializing not only in scouting, but also in close-range combat and stealth. He lacks range and pure damage, but can strategically take humans out and control the flow of the whole battle – if you’re skilled enough. Silently draw the humans closer with Hypnotic Lure and smash them with a mallet or channel your inner shinobi with a Lackey Swap and instantly substitute yourself with a nearby AI-controlled minion to quickly change your position while evading or attacking survivors.

Let’s get ready to rumble, because Shorty is not messing around. Want him to “knock your block off”? Then come closer and kiss his Boxing Gloves. Shorty does not give a damn, he just wants to fight someone. He trained his whole life to invade a small town in the United States, and on April 1st 1988, his dreams came true. His melee prowess and agility make him a formidable, yet loud opponent. And he cannot detect humans. He is here to fight. Prop hunt connoisseurs will enjoy playing as Shorty because of his ability to disguise himself as a pizza box. You won’t believe it, but this ability is called Pizza Box. Did that pizza box just move? Anyway, Shorty will make you feel like prey. Ha-ha, here’s some reference to another game where you can turn into objects. But there’s more – Fighter has a Speedy Tricycle which, unlike Tracker’s Invisible Car, can be used indoors. Pedal your way to victory and hit the brakes to jump off the bicycle and crash into your enemies.

Does all of this live up to your expectations from the Killer Klowns From Outer Space film or did you expect something different? How hard will matches be if there is not a Tank or a Fighter in the crew? Are you already planning your synergies between all of them out there or will you be waiting to see how the humans will function before planning any of that? Give us all of your thoughts on this down in the comments and then feel free to discuss it all if you so wish to do so. When we have anything more for Killer Klowns From Outer Space: The Game, know we will share it all here. Please keep checking back in on the site for all of that and everything else the team can muster up for you.