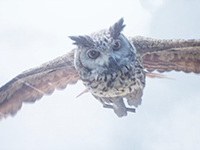 Your invite is on the way for you to attend Hogwarts soon. I am guessing you already knew all of that if you pre-ordered the game from Avalanche Software for the PS5, Xbox Series X|S, or PC. February 10th is right around the corner for all of that and the latest for the Wizarding World. The latest is a nice and new cinematic for Hogwarts Legacy that not only gives us that invitation but flies us around the various biomes and areas we will have to explore in the game. It also looks to have a few of the enemies we are going to have to manage in the mix of all of that too. Even if it may not be in the actual gameplay of things here. Yes, we are still waiting for some of that final gameplay to take in here…

I do question the use of the Owls from Hogwarts to show all of this off, as it takes the most dangerous path ever to make sure we have another recruit to the good wizard side of the conflict. There will be a load of spiders, dragons, and Death Eaters in the mix out there that will be overly dangerous in general. I have a feeling all of them will be a bit more accurate towards us all when playing Hogwarts Legacy, but it would be weird to see that they have just as bad of accuracy when attacking in the full game. They are the bad guys and that is the trope, though, so I guess we will have to wait and see. Thankfully, that is only a few weeks away from now and we can see how that will function with some true gameplay. Yes, there is a pattern here.

Warner Bros. Games and Avalanche Software debuted an all-new cinematic trailer for Hogwarts Legacy, the upcoming open-world, action RPG releasing for PlayStation 5, Xbox Series X|S, and PC on February 10, 2023. The video immerses viewers in the world of Hogwarts Legacy, giving fans a breathtaking bird’s eye view of the castle grounds and beyond, while also extending an invitation for players to become a part of the magic and live out their dreams of attending Hogwarts School of Witchcraft and Wizardry.

The cinematic follows an owl carrying the coveted invitation as it soars across the castle rooftops and over the heads of students in The Great Hall, providing an overhead view of some of the iconic Hogwarts locations that players will be able to explore. As the owl glides through the castle, fans will recognize some familiar names and faces, including Nearly Headless Nick and Professor Weasley. The owl’s journey also highlights some of the hidden dangers that players will face, as it narrowly avoids a horde of giant spiders in the Forbidden Forest, a deadly blast of Avada Kedavra from a masked wizard, and a dragon’s fiery breath.

Are you fully ready to head off to Hogwarts here or do you need more of a reason to throw your money this way? Do you suspect that the enemies will be more brutal in the game or will their poor accuracy be a feature to help us survive in the mix of things? Could we actually have to face off with a dragon or will we just have to sneak through some of the layers out there instead? Feel free to talk about all of this and more in the comment section below. We are keeping all of our tabs open for Hogwarts Legacy and will have everything added here as best as we can. Please keep checking back for all of those updates and much, much more.