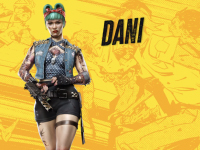 The slayers keep rolling out there for Dead Island 2 and we have the fourth one that we will get to rid along with to look at now. A new one from Ireland so Dambuster Studios can give us a different accent in the California-based setting out there. Not that I am going to complain, as with Dani here, we also get a Rockabilly Brawler type into Dead Island 2. Not what you would expect to have in a Zombie Apocalypse setting, but Dani does bring the heat for us here. All to get us ready for the game to drop on the PS4, PS5, Xbox One, Xbox Series X|S, and PC this April 28th. As long as there is nothing that will slow it down at all. That is always a worry and the IP has been known to have that happen already…

To try to help Dani stand out from the others in Dead Island 2, it looks like we will have a variety of extra skills for Dani to use. There is Bloodlust that will let Dani regain some health after quick and multiple kills. Then there is Thunderstruck, which will trigger some extra Forceful attack for Dani with an explosion on some impacts. How that will be different than other hits, we will have to wait and see, but it is listed as one of Dani's things. Have a look at the short little introduction we have and then maybe we will get something massive from Dead Island 2 in the coming weeks. That would seem how it could be with this being the fourth, and presumed final, Slayer we will get to control in the game at launch. Unless we have a few more hidden in the works to round things out more.

Meet Dani – a rockabilly brawler with a knack for fecking up zombies.

Hailing from the mosh pits of County Cork in Ireland, Dani is a headstrong rockabilly brawler with a foul mouth and a twisted sense of humor. She plows through zombies the way she plowed through opposing roller derby teams, pre-zompocalypse: with a grin and a yelled promise to feck you up!

Dead Island 2 comes out on April 28th, 2023 launching for PlayStation, Xbox, and PC.

Do you have any new thoughts on the various Slayers we are getting in Dead Island 2 or will you still have to wait to see how they play out? Could we have a few more announced after this or will these be the core four we get and others down the line as DLC? How do any of their skills truly differ besides a name and maybe behind-the-scenes stats for it all? Sound off in the comments and then feel free to discuss it all as you so wish to do. There is more for Dead Island 2 on the way, so please keep checking in for all of that and everything else that we may have to offer up for you. There is a good chunk of time to have more revealed so it could be an epic ride for us all to have along the way.