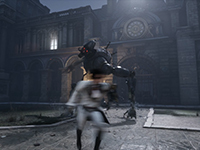 Get ready to see some new gameplay for Lies Of P that you most likely will not be able to see in the truest way out there. It is new in the fact that we get to see some new locations, enemies, and moves from Round8 Studio for the game, but it is also listed as new as it is trying to leverage the power of the Radeon RX 7900 to give us an 8K resolution experience. Something that we cannot truly show with the limitations of video embedding, but it is there. Also, it will be there for Lies Of P if you have the aforementioned hardware and a monitor that can also output the display quality it is offering up. Not something that everyone out there is going to be able to have or see, but it is possible for those that do. Just seems odd to hype that up and then limit the visuals to a max of 4K currently.

Visuals aside, we do get to see some of the basic enemies and another boss fight in Lies Of P that we will have to take on. Something shows off how this will be a Souls-like title that will require us to dodge, attack, and repeat many times over in the game. There will be some interesting mechanical creatures and puppets mixed into the steampunk work of Lies Of P too. We can focus on all of that for now, and ignore the fact that we can see it all in the 8K setting if we have a PC that can handle all of that. Have a look and see what we are talking about and try to temper your thoughts before you expect anything more than that.

Lies Of P is a highly-anticipated Action RPG launching later this year from our friends at NEOWIZ. This trailer showcases never-before-seen content from the game, running on AMD’s brand new Radeon RX 7900 XTX at 8K Resolution (8K Resolution playback only supported on 8K monitors).

Do you also find it odd that they are trying to show off Lies Of P in 8K for us or will it make sense down the line and after it launches? Will you have any of the hardware to see the game in this glory when it drops or will it be something to add to the buzz of it all instead? How do you feel about the enemies and mechanics we will have to work with in the final game here? Tell us all down in the comments and then feel free to discuss it all as you so wish to do so. When we have anything more for Lies Of P, know that we will share it all here for you. Please keep an eye out on the site for those updates and the various others that we have coming down the pipe too.