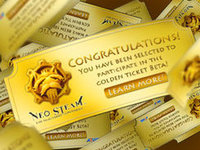 The few lucky enough to be granted to enter the beta will find a Golden Ticket in their e-mail inbox from May 5th to May 12th 2009.  Atlus has stated that this will not only give you access to the Golden Ticket Beta period, but all those chosen will receive special items in their inventory upon Launch Day.

Sign up today for your chance to participate in this closed beta. Neo Steam: The Shattered Continent is the first Steam Punk style MMORPG to be released. Set in the world of Chrysalis, where races lived in harmony with magic and science, and discovered the power of Neo Steam.  The world was shattered by a massive earthquake, leaving three seperate continents in its wake. Three nations, the Republic of Rogwel, Kingdom of Elerd and Taxn Alliance struggle to rebuild their societies. During the rebulding process, the nations begin to discover the machines of old, and thus a war breaks out over who will control the Neo Steam.

This is the first MMO that has really caught my eye in a long time and truly made me interested into making another attempt at the genre. With Atlus' credentials, this could very well turn out to be a very successful MMO and a unique experience. Good luck to all during the Beta selection period, and we will see you in the world of Chrysalis at some point regardless.
0 comments
Go ahead and login or register