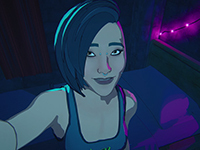 The next short is here for Marvel’s Midnight Suns and we get to see the glue that is going to hold the team together in the mix out there. Well, at least the one that is going to try to be the glue as Firaxis Games has set up for now. This would be Nico and while we do not get to see how Nico was recruited, we do get to see more of the role that Nico is going to play when it comes to the rest of the Midnight Suns out there. That and how the friendship mechanic will kind of work, thematically, when the game launches on December 2nd for the PS5, Xbox Series X|S, and PC. Possibly how it will function when we play the game directly too.

It is interesting to see that this role on the Midnight Suns is going to fall to the youngest member of the team and not the one that was bringing them all together here. Especially with that character having the name of Caretaker, but I guess this is something that they are making a comment on. That the younger generation is the one that wants to be part of a team and work together and the older generation always wants to go lone wolf out there. Even if some of the others on the Midnight Suns team are not that much older than Nico. You can see a bit of what I am talking about just a little lower down for all of what I am talking about here.

Nico might be the youngest on the team, but she is the heart and soul of the Midnight Suns. She is THE glue that keeps this team together. Watch how Nico unites the team in our final Prequel Short, Nico TV.

Marvel’s Midnight Suns Prequel Shorts is a set of five short videos that reveal how Lilith became the Mother of Demons, and how Super Heroes like Blade, Magik, Ghost Rider, and Nico Minoru came together to form the core of the Midnight Suns.

In addition to the above prequel for Marvel’s Midnight Suns, the team is also here to help celebrate the upcoming release of the game. You can see that just a little lower as they go in on the various aspects that they worked on and what they are looking forward to as well. There looks to be a few new bits of gameplay mixed into it all, but nothing that feels like it is going to ruin anything for the game. Some of these also show off more of the non-supernatural characters that have been forced onto the Midnight Suns team for this outing. Have a look and then get ready to play the game by the end of the week here.

It’s been a remarkable journey developing Marvel’s Midnight Suns for you. This is why.

Are you ready to play Marvel’s Midnight Suns here and dive into another aspect of the universe that has not had much love as of late? Do we need the other characters that the MCU has popularized out there or will those need to always be around given their popularity? How do you think Nico will keep everyone together in the mix or will it still be based on the relationship mechanics no matter the character that we are playing with out there? Give us all of that feedback down in the comments and then feel free to discuss it all as you so wish to. We will keep the news for Marvel’s Midnight Suns flowing out there, so just keep an eye on the site for all of that and much more.