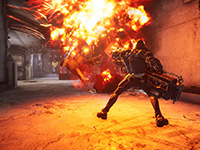 The launch of Gungrave G.O.R.E. is here to give us one more distraction to have over these holidays again

All of the teasing and build-up for Gungrave G.O.R.E. is now over and we can roll out there and actually give the game a go if we so chose to. The perfect time for a good chunk of the gaming market out there with Iggymob dropping this one just before the gluttony holiday for those in the States and then the cold weather holidays that will keep us all inside a bit more. For those that have the luxury of being able to do that with their PS4, PS5, Xbox One, Xbox Series X|S, and PC. Also for those that want to get in on the crazy action that Gungrave G.O.R.E. is going to be putting out there into the universe.

To go along with this celebration, if you did not catch on by now, there is also a fun and new trailer for Gungrave G.O.R.E. to show off to those on the fence still. A mix of pre-rendered and a mix of gameplay to show off how insane some of the action is going to be out there. It is a game where we run around with a massive tombstone of a weapon to save humanity. All with the normal over-the-top style that this game has been embracing for a while now. Have a look at Gungrave G.O.R.E.'s final trailer as you set out to download and get deep into the action. If it is somewhere near what you are looking for in your games out there.

Unleash your fury as the titular gunslinger Of Resurrection in this beautiful third-person action shooter with artwork from the legendary Mangaka Yasuhiro Nightow and Creative Director Ikumi Nakamura at Iggymob.

Have you been waiting for Gungrave G.O.R.E. to fully launch out there or have you been waiting until now to make that call? Do you think that this game will be an over-the-top romp through a new world or will it just be a high-action title with a little flair? Will you be needing a distraction from all of the world and family out there and will this be one that will keep you going? Tell us all down in the comments and then feel free to discuss it all as you so wish. If we have more for Gungrave G.O.R.E., it will be on the site for you to see. Just keep checking in for all of that and much, much more.