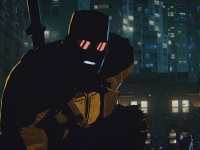 The next hero is on the prowl here for Marvel’s Midnight Suns with the prequel shorts again. This time we get to see how Blade is brought into the mix and it looks like the easiest one out there for Firaxis Games to have done. Given that he has always been on the Midnight Suns roster already, it would seem that it is an easy sell to explain why he joins in. That does not mean that we do not need a bit more of the fun to introduce him in and keep the animations flowing. We only have one more week to wait until the game hits the PS5, Xbox Series X|S, and PC on December 2nd, so I know I will at least take all of the fun build-ups to all of that.

Just as we could have assumed for this Midnight Suns recruit, he is ready to join up with almost no questions asked. He is already out there hunting down the vampires and other demons from the underworld out there, so it is just another option to keep the slaying going. Not to mention getting a bigger arsenal and more allies in the fight. Even if Blade is normally a lone wolf out there, I am sure he will take the options for all of this. That and it seems like Blade and Caretaker have something going on well before Marvel’s Midnight Suns kicks off. While that might be lackluster, all of the vampire-slaying does keep the ball rolling out extremely well. Have a look and get ready to see just what he will bring to it all.

Enter The Daywalker. Witness the recruitment of Blade as he looks to join the hunt with the Midnight Suns!

Marvel’s Midnight Suns Prequel Shorts is a set of five short videos that reveal how Lilith became the Mother of Demons, and how Super Heroes like Blade, Magik, Ghost Rider, and Nico Minoru came together to form the core of the Midnight Suns.

Have you been keeping up on all of the prequels for Marvel’s Midnight Suns or do you need to get up to speed before the next week? Did you think that Blade would be a harder sell to join the team or does this seem like it works how you would think? Who do you think will be the next member we get seen pulled into the team here and will it be one that we will not expect? Tell us all what you think down in the comments and then feel free to discuss it all if you so wish. More for Marvel’s Midnight Suns is on the way for us all, so please keep checking back in for all of that and everything else that we have in the pipes for you.