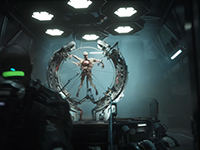 It is insane to think that we are almost here with The Callisto Protocol hitting your PS4, PS5, Xbox One, Xbox Series X|S, and PC. In just over a week, on December 2nd, many of us will get to experience a new level of horror in video games from Striking Distance Studios. That is, unless, all of the hype building up to The Callisto Protocol was only that. I do not think that it is but you can never know in today's market of advertising. Thankfully, we have one last look at the game before it launches out there to see if it is going to live up to what we think it is. All to get better ready for that final launch out there.

This new trailer for The Callisto Protocol does show off some of the extra horrors we will be experiencing in the game from the human side of things. It also has even more of the Dead Space feel to it all too. Not a shock with the teams involved and what they were setting out to do, but it does feel closer to home than I would have thought at this point in everything. The aforementioned game is still one of my top-tier games of all time, but I was hoping to see The Callisto Protocol mainly throw nods at the source and not feel more like it was a clone. Maybe the final build will show it all in a different light. For now, though, we get to see a lot of the familiar and hope we get more than someone throwing things and mutated humans with telekinesis while making sure their green bars are not empty; all on a creepy and infected ship in the middle of space…

Set on Jupiter’s dead moon Callisto in the year 2320, The Callisto Protocol casts players as Jacob Lee — an inmate in Black Iron Prison. When a mysterious outbreak throws the moon into chaos, Jacob must face his darkest fears to defeat the bloodthirsty creatures that stalk him as he unravels the dark mysteries at the heart of the powerful United Jupiter Company. The Callisto Protocol will be available on December 2, 2022, on PlayStation, Xbox, and PC platforms.

Are you overly excited to see The Callisto Protocol launch out there or are you still being cautiously optimistic given the look and feel for it all? Will the nods to the previous work only be seen in these marketing videos or will the whole game feel that way? Will you be getting extra pants to play this game or will you just opt to stay on the toilet the whole time so you do not even need to worry about making a mess? Give us all of that feedback down in the comments and then feel free to discuss it all as you so wish to. More for The Callisto Protocol should be on the site soon, so please keep an eye out for all of that and much, much more.