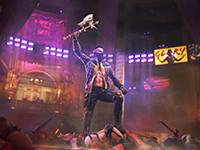 Dying Light 2: Bloody Ties has launched out there now and we can get into the pits just a bit more in our Dying Light 2 experience

The next big story is finally here for Dying Light 2 with Blood Ties launching out on the PS4, PS5, Xbox One, Xbox Series X|S, Switch, and PC. Not only the next big story from Techland in the mix of it all, though, but a whole new set of fights have in the gladiator pits in the world. This is something we had a few samples of in Dying Light 2 already, but this new DLC is going all in. All while giving us a deeply moving story in the mix as well. That is, at least, based on the new video we have to look at and gawk over while waiting for the DLC to finally download to our systems.

If you missed out on it before, Blood Ties will be giving us a bit more of a story about one of the friends we made along the way in Dying Light 2 already. This time, it looks like their son has been wrapped up in these gladiator fights to earn "money" and fame out there with the threat of death at the infected’s hands. More or less the standard affair in the game. The twist here is that Aiden learns that they changed things up to kill the living and the infected in the fights and it almost signs a full death warrant for our charge. Now we will have to charge in and get all bloody the only way that Dying Light 2 knows how to do. Have a little bit of a sample for all of that just a little bit lower and see just how this game will be expanding things just a bit further.

In Bloody Ties, players will embark on a new story adventure, you will reach the epicenter of death, wealth, and absolute splendor in a stunning location; The Carnage Hall. This old opera building is full of challenges and quests, surprising new weapon types, character interactions, and discoveries to uncover.

Players who pre-order will get access to the Aristocrat Pack, including an exclusive weapon and outfit!

Have you been enjoying Dying Light 2 up to now and were in need of some new story to keep you running out there? How different do you think these fights are going to be in the mix and will they shake things up in the core game? Why do you think we are seeing the death of the living out there or is it truly a madman that is taking over things? Give us those thoughts down in the comments and then feel free to discuss it all if you so wish to do so. We will keep sharing all that we can for Dying Light 2 here, so please keep checking back in for all of that and everything else we have to offer up along the way.