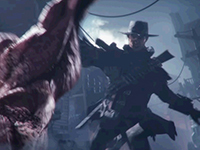 The Evil West is riding on and we are getting more onboard with it all with each new bit of gameplay. It has been growing into a nice and new version of the Wild West out there with Flying Wild Hog making sure it will be great as a standalone title. That last part might not be sitting well with everyone, though, which means that we now have to look at the co-op gameplay that is on the way now for Evil West that can be experienced. If you so want to, that is. It is not needed to experience, but just one more little extra to give everyone for the game.

This co-op is definitely an option for Evil West, so do not worry too much if you do not have a friend to go online with. They would only be in the mix to help out in your campaign or you into theirs with only a few extra beasties in the mix to beat down. The character models look the same and look to handle the same from the following trailer we have for it all. Not a terrible thing, nothing that anyone looking for the full Evil West experience is going to have to fret over if they cannot find someone to join them online. You can see just about what I am talking about if you look a little lower down for the full video released.

Evil West, the third-person action game that puts you in the boots of a vampire hunter rescuing a Wild West devoured by darkness, just shared a first look at its online co-op mode in a new trailer. Evil West releases November 22 on PlayStation 5, PlayStation 4, Xbox Series X|S, Xbox One, and PC. Watch the Co-op Gameplay Trailer and pre-order the game now!

Take on monster hunting with a friend

Designed as an explosive solo action adventure at heart, Evil West does not shy away from offering the option to turn an intrepid lone ranger’s journey into quality time slaying vampires with a buddy. It takes the form of an online cooperation mode that allows for two players to team up. Host and invite a friend on a segment of your journey or take on all missions together, blasting horrifying monsters in tandem and unleashing explosive combos in twice-the-fun, twice-the-style sequences. Mix and match your characters’ weapons and skills for ever-expanding action possibilities!

Solo or with a friend, play Evil West on November 22 on PlayStation 5, PlayStation 4, Xbox Series X|S, Xbox One, and PC. Pre-orders are open on all platforms and on the Focus Entertainment Store with an exclusive cover art for physical editions.

Were you originally planning on playing Evil West with a friend or going the whole game solo? Did you expect there to be more than a slight color swap for the characters or will this keep the experience feeling the same no matter how we play it? Would you want to have a fully shared progression in the game or is it always nice to be able to go back and play your version on your own? Let us all know what you are thinking about all of this down in the comments. We will share more for Evil West as we get it, but with the release so soon, I have a feeling it will be more on the promotional side until the DLC starts to flow.