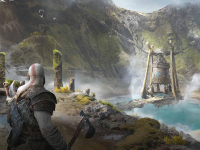 One more behind the scenes for God Of War: Ragnarök is here to show off the dwarves we will be helping in this God Of War

We are all just one week away from having God Of War: Ragnarök in our homes and everyone breaking new things with the PS4 and PS5. Even if it will feel a little off to be playing the new title on November 9th instead of the Tuesday or Friday it normally would have dropped on. All of that aside, though, we can look forward to not only the game but a new look at things behind the scenes from Santa Monica Studio here. This time in how the characters and creatures were crafted for God Of War: Ragnarök with a heavy push on the dwarves of Svartalfheim too. Also with a load of new looks at what this realm will be adding into the game's overall fun.

You can see this full video just a bit lower but do get ready that it does show off some other new characters coming to God Of War: Ragnarök that feel like they will play some larger roles. In addition to giving us more Brock and Sindri in the mix too. It is also fun to see some of the basic and mini-boss monsters that have been made with this whole new realm in mind so they fit and stand out from the others we have seen many times over in the previous God Of War too. I have a feeling we will still be getting those, so mixing things up will be greatly appreciated in my eyes. Have a look and see just how the team has further gone in to bring this one all to life.

Join us in Svartalfheim, land of the dwarves and home to the Huldra Brothers, Brok, and Sindri. Episode 3 of the God Of War: Ragnarök Behind the Scenes series will be diving into how the team at Santa Monica Studio creates characters and creatures that bring our Norse realms to life.

God Of War: Ragnarök is coming to PS4 and PS5 on November 9th!

For those looking to have a little more fun with all of this for the launch of God Of War: Ragnarök, there is another fun little promotional video that has dropped on us too. This one is all promo and next to nothing for actual gameplay. It does have a lot more Ben Stiller in the mix all done up as Kratos, so that is a nice little bit of fun to help keep us all distracted for a few more minutes. I am just including it to make sure you have all the media you can handle here for God Of War: Ragnarök even if, as I said, it does not add much more to the game specifically. Unless this is their way of saying we might get a Ben Stiller skin in the game…

God Of War: Ragnarök — All Parents Can Relate

What could real parents learn from the relationship between Kratos and Atreus? Whether you’re a famous celebrity or a troubled god, parenting is always a work in progress. Just ask parent support group leader, Ben Stiller, as he explains to LeBron James, John Travolta, and their children how the father/son dynamic in God Of War: Ragnarök can inspire us all to become better parents - especially when wearing the Kratos costume.

God Of War: Ragnarök arrives on PS5 and PS4 on November 9th and these famous families aren’t waiting a minute longer to fully embrace a new way of parenting… well at least the parents.

Are you ready to dive back in to what God Of War has to offer us or are you one of those weirdos that do not love epic games? How different do you think the other realms will be based on what we get to see here or will some of them be the same as we have seen before? Is it odd that we are getting the title on a Wednesday or will this further push home the Odin side of the story more than anything? Let the world know down in the comments and then get ready for the end with some discussion. If we have more for God Of War: Ragnarök, and we will, it will be added to the site for everyone. Please keep checking back in for all of that and everything else that is still flowing out there.