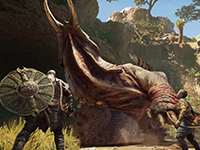 God Of War: Ragnarök is gearing up further for the launch to put more God Of War in our lives very soon

Ragnarök is almost upon us and we are going to be able to dive deeper into God Of War: Ragnarök very soon. I cannot believe that November 9th has rolled up on all of us as quickly as it has, but here we are. Only a little over a week for all of us to see how Santa Monica Studio is going to wrap up this part of the story on the PS4 and PS5. Maybe even build into a whole new God Of War story and line too. For now, though, let us look at what is coming with the latest launch trailer we have for the game just before it hits all of our screens at home.

It is not much of a big trailer for God Of War: Ragnarök and it does not give us all much more to take in before launch. This is a good thing for those looking to keep it as spoiler-free as possible. In fact, we only get a little bit of a scene that feels like Odin showing up to confront Kratos directly, but this could be a bit of a different scene instead. Everything else that we have here is from the past videos we have seen for God Of War: Ragnarök before now. It all works, but for those looking to get spoiled in any bit, you are going to be left out of it all.

Join Kratos and Atreus on a mythic journey for answers before the prophesied battle that will end the world.

All the while, the eyes of Asgard watch their every move…

God Of War: Ragnarök is coming to PS4 and PS5 on November 9th!

Have you been able to stay clear of all of the spoilers out there for God Of War: Ragnarök or have you been spoiled already? Do you think we are seeing Odin here or is it going to be a flashback or Thor that we have coming to the door? What role do you think that Tyr is playing in the grand scheme of all of this? Tell us all what you are thinking down in the comments and then feel free to discuss it all as you so wish. More for God Of War: Ragnarök is on the way, so keep checking back in for all of that and much, much more.