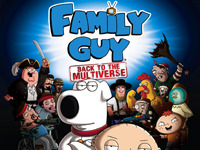 The story involves Stewie and Brian re-entering the multiverse to stop Stewie's half brother Bertram. They must stop Bertram's plan to wipe out Stevie and Brain in the Multiverse. Confused yet? It all ties into the TV show in season 9's episode The Big Bang Theory when Stewie killed Bertram with a crossbow. However the multiverses represent different parallel universes where Bertram is still alive. Bertram wants to kill Stewie in the different multiverses to stop him from killing him in their own universe. To carry out his plain Bertram pays off the people in the other universes to eliminate Stewie and Brain. During the game you will be able to switch between Brain and Stewie at any time to take advantage of the different weapons. The game will also feature local co-op in which you will be able to play through the whole game and different scenarios as other family guy characters such as Chris and Death.

The game will feature a wide array of weapons themed after the show such as the show’s famous fighting chicken. The weapons are specific to each character. Brian uses real world weapons such as sniper rifles, 9mm pistol and a broken beer bottle for melee attacks. Stewie uses ray guns, exploding diapers and other sc-fi weapons. Back To The Multiverse will feature many different universes such as a Handicap and an Amish universe. If you preorder the game at GameStop you will receive the Space Station challenge where you will be fighting off evil chickens in space. If you preorder at Amazon you will receive the evil pack which comes with Evil Stewie and Mayor West costumes which can be used in multiplayer and challenge mode. Check out some new screenshots of the space station challenge below as well of some screenshots of a few of the universes in the game. Get prepared to explore the multiverse when Family Guy Back To The Multiverse releases on September 25th.