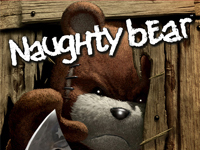 Well wonder no more as Naughty Bear has come out and will give you an in-depth look into the world of the teddy bear. This is no "kiddy" game mind you as it plays out a bit like Manhunt with the cute and cuddly. Let me break it down for you on what you can expect from Naughty Bear.

First and foremost, Naughty Bear plays out like most third-person shooters on the market; the controls are close to the same - only with the obvious changes needed to go along with this type of game. It's not exceptionally difficult to get the swing of things and move about the game world.

On a few occasions I will say that the controls became a little clunky - at least on registering which object to interact with or pick up. Both were a simple button press, but sometimes I would find myself climbing out a window instead of sabotaging an arcade game machine or vice versa. While this doesn't sound too debilitating, when you are trying to sneak around, these could make or break being seen.

Also, the inclusion of a dodge button seemed like the developers just wanted to use every button on the controller. There is no reason for this dodge button because it is worlds easier to step back instead of waiting for the duck animation to play out. Just my thoughts. I only used it twice. Once to see what it did and the second time was an accident.

For this style of game, the graphics were right on target. It is a game about one teddy bear, Naughty Bear, exacting revenge on the perfect island of other teddy bears. No need for insane textures or complex models. They really captured the look and feel of a Saturday morning-style cartoon with everything they did.

Another great feature they added into the HUD was a small picture-in-picture view of other actions that are happening in the game world. Be it police/ninjas/swat/robots/soldiers/aliens/unibears showing up in the game world, or simply allowing you to watch another bear off themselves while you move onto the next victim. This was something I enjoyed verily in Naughty Bear, especially when it came to speed runs. I didn't have to miss out on any of the action while speeding around the levels.

One major gripe I do have about the visuals though is that there were no real lighting effects or good use of light. It seemed to be either on or off and when it was off, it was almost impossible to move about the level or see things. This was most evident in the Night of the Living Ted level when all you could really make out was the glowing red of the Zombear eyes, which as a scare effect would be cool, but when I am stumbling everywhere trying to accomplish the goals the designers have set forth...it does not sit too well. Maybe if they added functionality to change the brightness this could have been avoided, but alas that was not added.

If you are expecting epic themes - like in God of War - or great voice acting - like Mass Effect - you are looking in the wrong place. That is partly for good reason, but if your expectations are more along the line of The Sims, you are much closer. In a nut shell, all of the background music and dialog for the bears are just canned and garbled gibberish. The only real deviation is that of the narrator/announcer for the game. The same British voice that has been heard in all of the videos I've posted - a bit dry, but still fun.

I do have to ask who thought it was a good idea to have a different sound for each item you can select in the game menu. It seriously sounds like a one man band at times when cycling through to pick a new costume or level to play. Not horrible, but after the twelfth time it can start to grate on your nerves.

For the most part, the whole game is the same game play mode throughout, just with the guise of having eight different modes. The other "modes" pretty much just add on another goal to the basic missions. Modes like:

Now, at first glance, it looks like there is a lot of variety here, but honestly there is as much variety in the game play as there are in the four recycled maps. Yea, you read that correctly. There are only four maps that are linked together to play all of these "modes." Sadly, this is all glossed over a bit with what I mentioned before - lighting - to make it seem like there is a huge deviation between all of the maps.

With very little diversity in game play and levels to play, I am curious as to where all the production time used went towards? That is summed up in AI. I will say that Naughty Bear has some pretty decent AI that is slightly unpredictable. At least until you get the other bears to go insane or be severely injured. That's when they become like every half-naked bimbo in a horror film. Read that as being able to scare them right into the place you want them to be. None the less, kudos to the AI for the game.

Now with all the negativity above, I bet you are expecting me to give some pretty bad final words here. With some of the poorly implemented graphics, repetitive audio and faux game play I will have to say that this game is not for every gamer out there. This game wasn't made for the mainstream masses of gamers out there was it? No. It was made for gamers out there with specific tastes, like me.

Before you spend money on Naughty Bear, think about this: does the concept of the game truly appeal to you? Think Manhunt with teddy bears. If that tickles your fancy, then you should totally give Naughty Bear a whirl. It may not have a lot of game play or options, but when you are having a bad day and want to make something cute and cuddly pay for it, you will be putting Naughty Bear in for a few hours. I mean who wouldn't want to smash a bear's face in with an axe? If you didn't say "Me!" then you fall into the first category - of those this game is not for.

Naughty Bear was developed by Artificial Mind & Movement and published by 505 Games on June 29th for the PS3 and XBox 360. Retailing for $49.99. A copy of the game was provided by the publisher for review purposes. I played through the main story and most of the side missions.