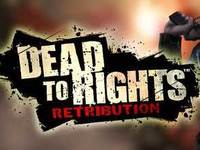 Well, the folks over at Namco decided that it was time for a reboot and handed those responsibilities over to Volatile Games - the mature games division of Blitz Game Studios. In most cases, a rebooting of a franchise is a public declaration that everything before the reboot was ultimately forgettable. Further, it would want to suggest that the new entry will be the definitive moment of sheer awesome fans have clamored to receive.

In many ways, Dead to Rights: Retribution does make good on that declaration. While it may have its share of shortcomings, anyone who picks up the controller to take the reins of Jack Slate’s journey o’ vengeance should have themselves a pretty good, but ultimately forgettable (and maybe overpriced) time.

One of the first things that you’ll notice is that the game has a great deal more personality than previous entries in the series. The city, while washed in browns, grays and varying shades therein, feels much more alive than ever before. And while the average pedestrian walking through the city shows no real signs of engaging character design, the enemies faced were varied enough to keep me interested. The factions found in the game each fits a basic mold (hand to hand expert, sniper, assault trooper, etc.), but the aesthetic of each faction you’ll face is very well done. I looked forward to unlocking each piece of concept art and various sketches to see the evolution of these designs.

Outside of the varied design, graphically the game is okay. There are times where I really appreciated the simplicity and straight-forward nature of it. Other times, it just does work very well. Since the game wears a badge of arcade-style gameplay so proudly, the graphics didn’t bother me all that much. However, for a game that wants to redefine itself in such a crowded marketplace, I think it would have helped to really up the ante graphically. When the game starts, Jack has been severely injured and you must use Shadow to protect and guide him through a ravaged train yard. For the developers to choose starting the game off in control of the dog was a good choice. It was certainly unexpected, but it allowed me to get a feel for the world and the type of over-the-top action I could expect. And though I might have seen several finishing animations repeated, I never grew tired of them – which says a lot. Shadow also serves as the stealth element to the game and while it’s not as flushed out as it could be, the levels where this was utilized were solid.

The brutality of the game is gleefully presented right up front. Jack is a very competent marksman and you’ll find that mowing down enemies with the varied weapons in the game is more than serviceable (a personal favorite is the GAC Shock Rifle - a “neuromuscular incapacitation weapon”). The games particularly shines when you take that gunplay and combine it with some very fun hand to hand combat. Our hero is a more than capable fighter and has no problem mixing it up with, well, anyone. Using the two striking buttons, you’ll find a nice amount of combos that can ultimately lead up to any number of powerfully vicious finishing moves. The game revels in it, and so should you.

There’s nothing quite like delivering a few jabs and a roundhouse, only to go into a swinging neckbreaker then into a curb stomp-type maneuver. There is no reason why such a thing should even be possible, or warranted, but it’s a whole lotta fun.

The action comes at you from a million different directions, literally it sometimes seems, but it never feels too out of control. The controls really only became a problem for me when I was surrounded by enemies in a hand to hand situation. Trying to keep tabs on where haymakers and roundhouse kicks were coming from while navigating the camera caused me to sigh disapprovingly on more than one occasion. In managing the action, Jack comes equipped with a bullet-time styled meter that can be built by performing headshots, take downs and a variety of other ways. Being able to turn it off and on at your discretion helps in clearing out a room of enemies and doesn’t force you to wait to determine the best time to let loose with it.

Getting back to the subject of the game being over the top, it would probably be a good time to mention the dialog in this game. DtR:R is a neo-noir game, after all, and with such a setting you’re going to have to expect quite a bit of heavy-handed, ham-fisted and hard-boiled dialog. It feels right at home with the rest of the game, but after hearing Jack utter, “You have the right to remain silent” after putting the one billionth bullet in the head of some hired goon, it goes beyond grating. The game is a blast to play. Even with the mix of Slate’s brutality and Shadow’s testikill..er.. ality, the argument can be made that there is simply not enough to justify the $59.99 price tag. For me, the chance to go from a title grounded in taking itself extremely serious to being able to just lay waste to foes was enough.

There is a nice chunk of DLC for the game that includes the GAC Pack:

If you’re looking to fill the void between bigger titles on the horizon, give Dead to Rights: Retribution a go. The lack of any multiplayer was disappointing and I could very easily see some levels where being able to play as Jack’s father Frank, or as the dog Shadow, would have been a lot of fun. DtR:R is an all too brief ten hour adventure, which I would recommend you rent from whatever avenue you have available. There is some replay value, whether that's in the DLC for the game, trying to go back and improve your score or rack up achievements/trophies. I have no doubt you’ll see people question why this was made or why you should play it.

Look, it’s fun while it lasts. So spend some time with it and get to know the joys of the Scrotality for yourself.

Dead to Rights: Retribution is available for both the XBox 360 and the PlayStation 3. Namco provided a copy of the title along with access to the downloadable content for the purposes of review. It is rated "M" for mature audiences by the ESRB and carries an MSRP of $59.99. The "GAC Pack" will be released on June 1st for the XBox Live Marketplace for 400 Microsoft Points and on the PlayStation Network for $4.99. Players must have the retail version of the game to access the DLC.